Jeffery Johnson teaches actively for 15 state banking associations in the United States, Risk Management Association (RMA) and individual banks nationwide. He is an experienced training professional having worked for the Association for over many years. Johnson is in his 10th year as an Executive Development Program instructor and is a clear favorite due to his style and comfortable demeanor. His evaluations consistently exceed students’ expectations. 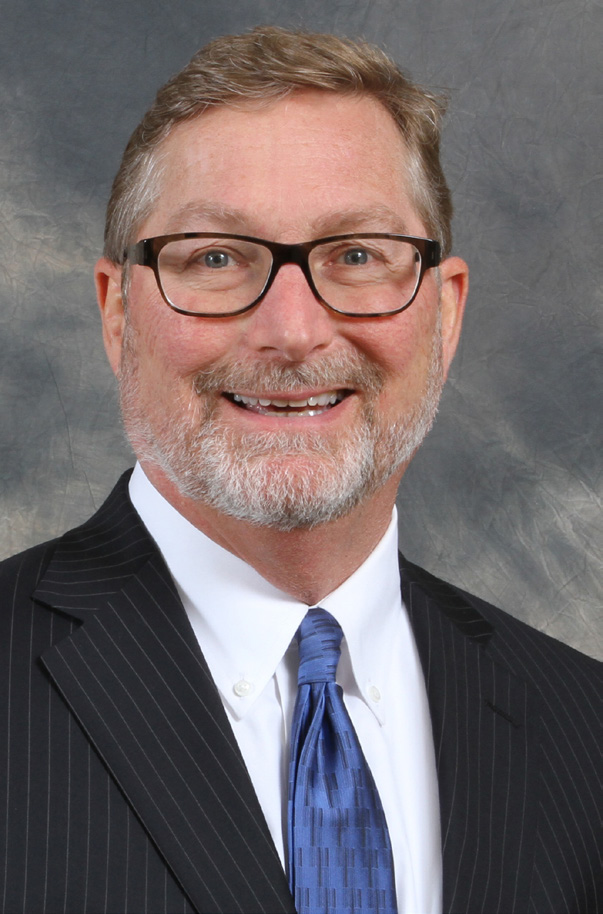 Jeffrey F. Caughron is a Managing Director with The Baker Group, where he serves as President and Chief Executive Officer. Caughron has worked in financial markets and the securities industry since 1985, always with an emphasis on banking, investments, and interest rate risk management. He previously served as the Chief Operations Officer of the firm and has been Director of Asset/Liability Management since 2008.

Caughron’s trading experience includes several years on the Treasury desk for an international bank on Wall Street, with subsequent positions trading mortgage-backed securities and other taxable fixed income products for regional broker/dealers. He has expertise in broad asset/liability management issues, working with institutional accounts on controlling interest rate risk exposures and maximizing returns. He has published numerous articles on various risk management topics throughout the years and is frequently quoted in the financial press. Caughron has served on the faculty of several banking schools and has done consulting work overseas for foreign banks. He earned his degree in economics from the University of Oklahoma.

Jill E. Hall is a Member in the Labor & Employment and Employee Benefits & ERISA practice groups, as well as the Banking and Health Care industry groups. She practices out of the Firm’s office in Charleston, West Virginia.

Jill has extensive experience at both the state and federal level in the areas of labor & employment law and employee benefits, the Employee Retirement Income Security Act of 1974 (ERISA) and ERISA litigation. She has written extensively about these areas of the law and is a frequent speaker on employment and benefits-related topics. She regularly advises clients on a wide array of human resources matters under both state and federal law. Jill also represents employers, insurers, and third-party administrators in all aspects of health and welfare plan compliance and regularly advises clients on the requirements of the Affordable Care Act. Jill also has experience in advising employers involved in major labor negotiations regarding health and welfare plan issues.

Jill is adept at every stage of the ERISA legal process, from the pre-suit administrative process to appeals in state and federal courts, including successful appearances before the United States Court of Appeals for the Fourth Circuit. She has litigated matters such as ERISA preemption, fiduciary obligations, and claims for benefits. She also has extensive experience in drafting, compliance, and advisory work, as well as subrogation and reimbursement rights under health plans.

Jill began her legal career as a law clerk to The Honorable Frederick P. Stamp, Jr., in the U.S. District Court for the Northern District of West Virginia. Jill has received recognition for her work, having been named to The Best Lawyers in America® as Lawyer of the Year for her work in Employee Benefits and ERISA, and a Rising Star and Super Lawyer in Employment & Labor by West Virginia Super Lawyers®. She has a preeminent AV rating with Martindale-Hubbell and has been named to Benchmark Litigation's "Under 40 Hot List" for two consecutive years. She received her law degree from West Virginia University College of Law, having graduated Order of the Coif and a member of Law Review, and graduated summa cum laude from Bethany College in Bethany, West Virginia.

Jim Rechel President of Rechel Group, a risk-consulting firm headquartered in Cincinnati, Ohio. He is on the board of numerous national organizations, and prior to working for The Rechel Group, Inc. Jim was Vice-President for Fifth Third Bank headquartered in Cincinnati, where he held positions in various departments including Retail and Lending, Security Director and a former Special Agent with the FBI.

John Barrickman has extensive experience in all aspects of banking including retail banking, commercial lending, credit administration and credit training. He also served for five years as president and chief executive officer of a $185 million financial institution. Barrickman has been a bank consultant focusing on risk management, credit process, strategic planning, and all aspects of commercial lending. He is widely known and respected for his ability to present complicated information in an easy-to-understand manner.

Justin M. Harrison is a Member in the Firm’s Labor and Employment Group, advising employers in Manufacturing, Banking, Health Care, and Energy.  He practices out of the Firm’s office in Charleston, West Virginia.

Justin has years of experience in labor and employment law, focusing on counseling employers and defending them against an array of discrimination and retaliation claims, including federal claims under the Americans with Disabilities Act, the Fair Labor Standards Act, the False Claims Act, and the Family and Medical Leave Act, as well as state claims arising under the West Virginia Wage Payment and Collection Act, West Virginia Human Rights Act and the West Virginia Patient Safety Act. Justin also has defended employers against claims involving workplace safety, breach of contract, restrictive covenants, employee drug testing, and class actions.

Justin counsels employers on ways to avoid litigation and ensure compliance, but rest assured – when litigation arises, he knows his way around the courtroom. He has taken several cases to verdict.

Justin presents on topics related to investigations, whistle-blowing, workplace violence, sexual harassment, and other issues involving performance management. He has been recognized by Chambers USA for his work as labor and employment lawyer, and as a West Virginia Super Lawyers® Rising Star in Employment Law and Litigation and a West Virginia Super Lawyer® in Employment Litigation.

A Mountaineer through and through, Justin received a bachelor’s degree, a master’s degree and a law degree - all from West Virginia University. In fact, he likes people to know that he’s a Virginian by birth, but a West Virginian by choice. In his spare time, you will find Justin outdoors, exploring and enjoying his adopted state.

Karl Nelson is the Founder and CEO of KPN Consulting, an organization engaged in the ALCO, Funding, and Liquidity arena. His career has included senior positions with Silverton Bank, IDC Deposits, and Promontory Interfinancial Network. In addition, Karl served as a Senior Vice President with the Federal Home Loan Bank of Atlanta from 1991 through 2002 where he managed the sales and marketing, strategic planning, and trade association/regulatory outreach efforts and served on the bank’s ALCO. Prior to joining the Home Loan Bank, he was involved for eighteen years with various regional banks. Karl serves on the faculties of the Graduate School of Banking in Madison, Wisconsin and Boulder, Colorado, the Graduate School of Bank Investments & Financial Management in Columbia, South Carolina, the Financial Managers School in Madison, as well as the faculties of the state banking schools in Florida and Tennessee. He also serves as the Chairman for Neighborhood Lending Partners, Inc, a Community Development Financial Institution serving the affordable housing and community revitalization needs for communities in the state of Florida. Mr. Nelson is an organizing Director and former ALCO Chair for a de novo bank in North Carolina and consults regularly with community bank Boards and Management on business strategies.

Lester F. Murray joined The Baker Group in 1986 and is
an Associate Partner within the firm’s Financial Strategies
Group. He helps community financial institutions develop and
implement investment and interest rate risk management
strategies. Before joining The Baker Group, he worked at
two broker/dealer banks in Oklahoma City and was also an
Assistant National Bank Examiner. A graduate of Oklahoma
State University, he holds Bachelor of Science degrees in
finance and economics. 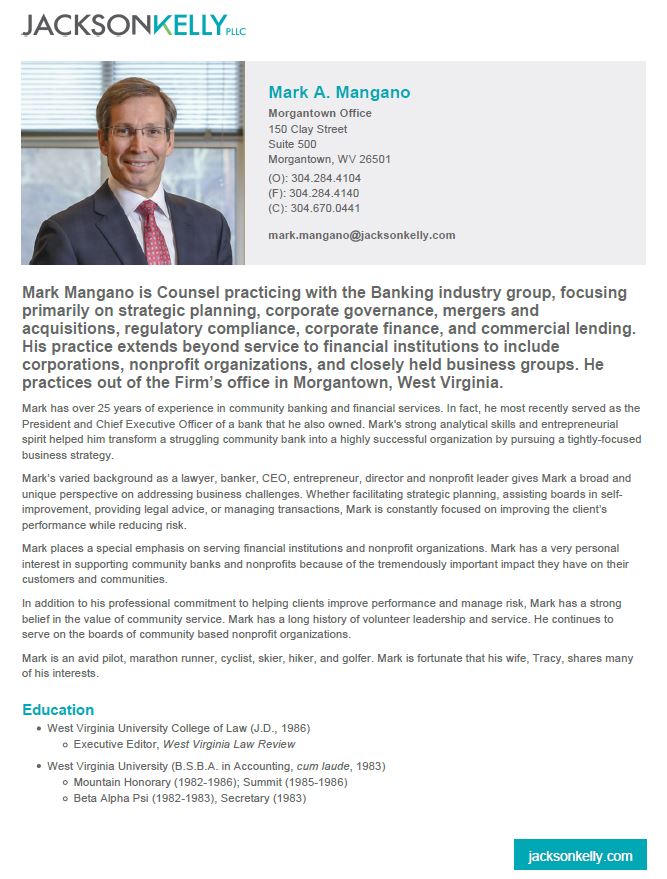